Preparations for FIMMA – Maderalia 2018 are now under way. The next edition of the biennial trade fair for materials and technology for the furniture, carpentry, decorating and furnishing industry is set to take place from 6th to 9th February 2018 at Feria Valencia, coinciding once again with Cevisama (5th-9th February).  Prospects for the returning event are better than ever since the last edition, in 2016, fully exploited the synergies of running alongside the ceramic tile and bathrooms fair, increasing visitor numbers by 44% to more than 28,000, all professionals. 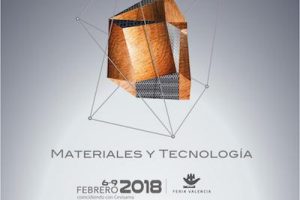 Starting the process, the Organising Committees of the two fairs met last week to give the next events the go-ahead and set its objectives. The two fairs, which will be celebrating their 38th editions in 2018, will seek to consolidate their leading position in the Mediterranean region and, in the words of the committee members, “create major fairs again” by taking advantage of the current economic climate, the industry’s recovery and Feria Valencia’s capabilities.

Another of both FIMMA’s and Maderalia’s objectives will be to extend the range of products featured at the two showcases, both in machinery, technology and solutions for the industry (FIMMA) and in materials and components (Maderalia). Especially in the latter area, where numbers of new materials beyond wood, used in the contract sector for example, have been appearing lately.

New additions to the Organising Committees

New look for the campaign

A well as setting the dates and objectives for the fairs, the Committee also gave the green light to the new look for the FIMMA – Maderalia 2018 campaign. Created by Feria Valencia’s own Marketing & Communications Department, the new look emphasizes the industry’s technological development and the versatility of the new materials across different applications.

Exponer
Espacios
Proveedores
©️Feria Valencia todos los derechos reservados      Aviso legal      Política de privacidad      Política de cookies      Map
We use cookies on our website to give you the most relevant experience by remembering your preferences and repeat visits. By clicking “Accept All”, you consent to the use of ALL the cookies. However, you may visit "Cookie Settings" to provide a controlled consent.
Cookie SettingsAccept All
Manage consent

This website uses cookies to improve your experience while you navigate through the website. Out of these, the cookies that are categorized as necessary are stored on your browser as they are essential for the working of basic functionalities of the website. We also use third-party cookies that help us analyze and understand how you use this website. These cookies will be stored in your browser only with your consent. You also have the option to opt-out of these cookies. But opting out of some of these cookies may affect your browsing experience.
SAVE & ACCEPT
Scroll to Top