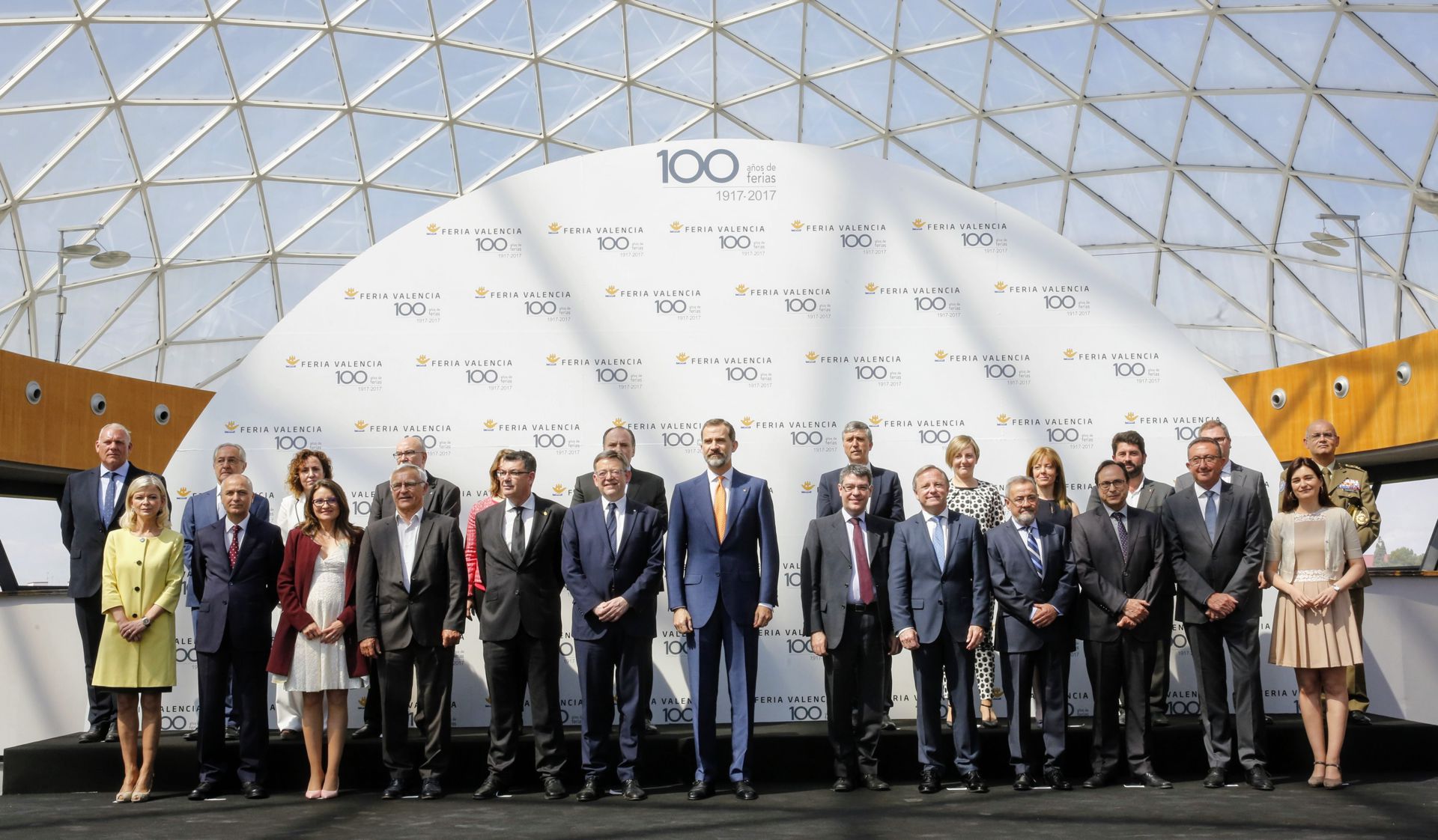 Valencia, 11 mayo 2017.- Yesterday King Felipe VI presided over the commemoration of Feria Valencia’s centenary at a major event held at the exhibition venue’s Events Centre. The King was accompanied by the President of the Regional Government, Ximo Puig, the Minister for Energy, Álvaro Nadal, the Mayor of Valencia, Joan Ribó and the Chairman of Feria Valencia’s Executive Committee, José Vicente González.

In his address the Monarch emphasised the point that Spain’s exhibition centres are “the cornerstones of sales promotion as they make the very most of the mechanisms and instruments that have emerged from the revolution in technology and from globalisation”. He also talked about the great value of the “human dimension and personal, face to face contact” that trade fairs provide and that technology “cannot replace.” “Exhibitions are unique events that are difficult to substitute with anything else”, he remarked.

The event recalled the opening on 10th May 1917, in the concourse of the Estación del Norte and the patio of the San Vicente Ferrer Imperial School for Children in Valencia, of Spain’s first Trade Fair Centre, which launched the trade fair industry in our country. To mark the occasion, Don Felipe gave the Trade Union a memento in acknowledgement of the fact that it had been the Union that, a hundred years ago, had brought into being the institution that as Feria Valencia today looks to the future with optimism, adapting its management and business model to the new challenges posed by competition. Over the last financial year Feria Valencia hosted a total of 31 fairs and 37 events, showcasing products from 4,177 brands and manufacturers, 26.8% of which were international, hailing from 39 different countries. In 2016 Feria Valencia welcomed 5429,820 visitors, including 181,499 trade visitors and 14.2% from 152 countries.

Feria Valencia’s role as a driver of the economy

In their speeches the authorities acknowledged the key role that Feria Valencia and trade fairs play as economic drivers. Commenting on the subject, energy Minister Álvaro Nadal said that Feria Valencia has played a significant role and managed to devise a process for producing more services and products that ”has got better and better”. He chose to point out that the Valencia exhibition centre is in fact “one of the top 10 venues in the world” and that Spain, “thanks to this venue”, is the world’s fourth largest trade tourism destination, behind only the USA, Germany and the United Kingdom.

For Valencia Regional Government president Ximo Puig, Feria Valencia is “the finest showcase a company could have” , specifying that were it not for the exhibition centre it would be “hard to explain why the  Comunitat has repeatedly contributed a surplus”, which he claimed had been 12,400 million euros during 2015-16, “to Spain’s balance of trade”. This is why, he stressed, the institution’s rebirth would be “a driver for the generation of employment and opportunities”.

Valencia’s mayor, Joan Ribó,  who is also chairman of Feria Valencia’s board of trustees, said that the institution is “a tool that makes the city, the region and the whole of Spain competitive. The aim is for its activity to continue to generate business and employment in the city and the surrounding area, in sectors such as hotels, catering, restaurants, design and communications”. He pointed out that a stronger, global Feria Valencia “will mean bigger profits” for these sectors.

Speaking last the institution’s president, José Vicente González , commented that, whilst we “should remember the past” we should now “look to the future”. “A few pessimists said that the Internet would be the end of doing business at trade fairs, but they were wrong. There is nothing that can take the place of personal contact and touching the product,” González remarked.

The Valencian exhibition centre has been busy throughout the first hundred years of its history, with the flow of activity only interrupted twice: once in 1921 on account of the period of mourning that was decreed after the Spanish army’s disaster near the Moroccan settlement of Annual, and between 1936 and 1942, the latter being the year in which the premises on the Paseo de la Alameda, which had been destroyed during the Civil War, were rebuilt.

Between 1917 and 1961 just one generic exhibition was organised each year then, in 1962, the venue extended its offering by staging Spain’s first event dedicated exclusively to toys. In 1963 the forerunner of the current Feria Hábitat Valencia, the Spanish Furniture, Wood and Wicker Furniture Fair was launched. The growth experienced in the sixties prompted the search for a new location. A few years later Valencia City Hall solved the problem by granting the institution the land upon which the venue stands today.

Given this background, Feria Valencia has also decided to take advantage of the anniversary to look to the future and has produced a commemorative publication titled ‘Eixida 2027. La Comunitat Valenciana d’ací a deu anys‘ (‘Eixida 2027, the Region of Valencia in ten years time’), in which 40 experts have imagined how this autonomous region will change in terms of demographics, logistics related to consumption, urban models, mobility, education, politics, technology, the production model, health and the role of women.

The prologue to the book explains that two central ideas emerged from different workshops that were held. The first is that the future is in the hands of society as a whole but that a sense of apathy is prevalent at the moment. The second key issue is that the future should be for all or there will be no future. In other wods, all the advances in technology, health, work and politics need to be directed at reducing the chasm that exists between rich and poor, whether these be individuals, communities, provinces, autonomous regions, countries or continents.

Of the propositions put forward the most notable included those to promote equality for women through education in fields such as science, the media, traditional culture and private life; to open education centres up to entities in the immediate area and to new professional profiles so as to create open schools; to use technologies that improve productivity and to continue with the lines of research and development that are already ongoing in areas such as 3D printing, nanotechnology applied to medicine, robotics and augmented intelligence.

The specialists also advocated fostering a vision of demography and migration that would create a plural society, promoting a more sustainable form of mobility, the political classes setting up a “Valencia 2027 strategy”, rationalising cities and making them more welcoming, encouraging intelligent consumption and reviving the values of the Mediterranean diet.

Coinciding with the main event marking Feria Valencia’s centenary, the institution has also launched a

new official website, with a completely fresh design and geared both to the new technological and connectivity requirements and to the needs of users, exhibitors and visitors.